Jennifer Lopez has served as a constant reminder that she stays loyal to herself no matter what she accomplishes or how well-known she gets. So to speak, she is still Jenny from the block. And as she approaches her CFDA Fashion Icon Award, which will place the 49-year-old Bronx-born artist in an elite group alongside fellow music legends Beyoncé, Rihanna, and Pharrell Williams, as well as supermodel Naomi Campbell, the late editor Franca Sozzani, and others, it's become clear that this consistency has played a significant role in how she's come to be where she is.

The SS23 collections from Ralph Lauren were presented off-the-cuff at a glamorous, star-studded event in San Marino, California. Diane Keaton and Mila Kunis were among the guests but expected, J-Lo stole the show with her low-cut pinstripe dress, a wide-brimmed hat, and arm-mounted new husband Ben Affleck.

From the comfort of her home, Jennifer Lopez modeled Intimissimi underwear, pairing a white lace teddy with a tonal silk robe that slid over her shoulder. She chose to wear her hair down and disheveled while wearing plum lipstick and Smokey eyes.

While out and about in New York, J-Lo delivered yet another great street style moment while donning a super-feminine sheer lilac lace dress with a prim white collar and an asymmetric length. The singer finished the look with her signature J-Lo accessories, including a white leather bag, big sunglasses, and sparkling earrings from Valentino. 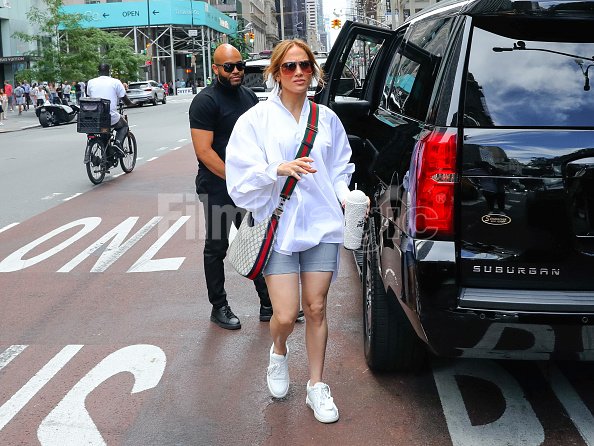 Jennifer Lopez was observed leaving the Hôtel de Carillon as she and Ben Affleck were on their honeymoon in Paris.

Lopez opted for a sleek chignon and huge sunglasses to complete her look. We say "yes" to that.

Following their Las Vegas wedding, the newlywed was spotted out on a stroll with her husband Ben Affleck while sporting extremely high platform heels.

The newlywed chose a keyhole detail dress by Reformation called the Stassie in bright pink fuchsia for the outing.

The most recent evidence that J-Lo is aging slowly? She wore an incredible outfit at the Tribeca Film Festival's Halftime film premiere. To show off her magnificent diamond drop earrings, Lopez donned a sheer black mesh dress by Tom Ford to the occasion.

While attending the LA premiere of The Tender Bar, Ben Affleck and Jennifer Lopez gave us huge 2003 Oscars throwback vibes and appeared more in love than ever.

The way Lopez appeared brought to mind the iconic Valentino princess gown she wore to the 2003 Oscars while carrying Affleck on her arm. She appeared at yesterday night's premiere in an equal princess but more contemporary Elie Saab gown. She accessorized the outfit with a stylish Tyler Ellis purse.

One thing is for certain: regardless of the rocks she has, she always kills it when it comes to fashion, from that stunning Versace outfit at the 200 Grammys to the vibrant ball gowns and statement-making looks at the Met Gala!